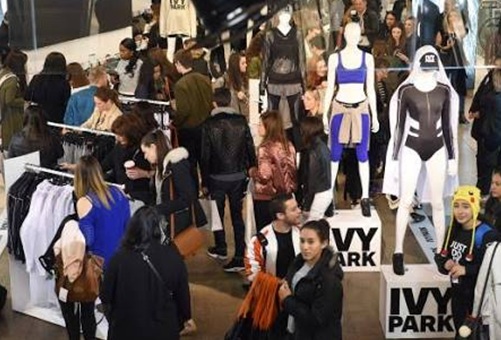 Beyoncé’s Ivy Park Crashed websites, But Stores, Not So Much

With the launch of Beyoncé’s new athleisure line Ivy Park, a long wait is over! The Ivy Park stores were opened out with little fanfare. The clothes are made available via Topshop, Nordstrom, Net-A-Porter and other sellers.  Their official website is www.ivypark.com.

Ivy park stores didn’t see many shoppers today. Outside of Washington, D.C., there was a rush in the Topshop section of Nordstrom. When the store opened, there was a crowd in the store. There were limited editions of some cloth lines. Bodysuits and sportswear went off quickly. Some of the section didn’t see many buyers. After one and half hour hardly any buyers could be spotted.

New York didn’t see much response on the first day. The London storefront was quite packed but didn’t find much frenetic activity. Some lesser known brands were in demand.

Online BeyHive buyers swarmed to Topshop’s website leading it to get crashed. Many cloth items went out of the stock soon. Many buyers were frustrated and disgruntled customers took it to the Twitter to vent out their frustration. Topshop and Nordstrom’s digital press teams have assured that stocks would be replenished.

Ivy Park is a new fashion line from Beyoncé Knowles. It sells the on-trend mix of sleek workout gear and casual clothing with a premium activewear label.

The new cloth line is a joint venture with Sir Philip Green of the Arcadia Group. Beyoncé has put in lots of efforts on Ivy Park. They took the time to develop custom technical fabrics and tried to focus on pushing athletic wear.

This is not the first time that Beyoncé has plunged into this field. Her initial foray into fashion took place in 2004 with a label called House of Deréon. It couldn’t win over the masses and was folded in 2012.

Many times celebrity fashion brands fail as they don’t put in much effort to learn about customers likes. They hype hard for launch but don’t maintain the momentum.

Beyoncé is very hopeful about her new venture. To put in her words, “My goal with Ivy Park is to push the boundaries of athletic wear and to support and inspire women who understand that beauty is more than your physical appearance.”