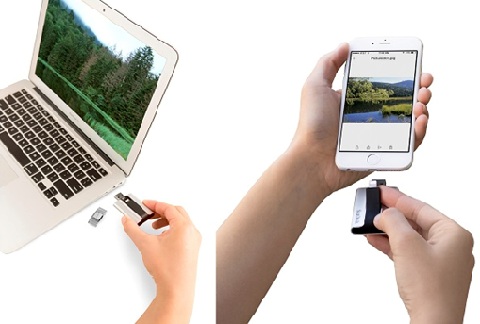 SanDisk has launched a new generation iXpand Flash Drive that helps provide extra storage for iOS devices. The iXpand drive sports a lightning connector that connects to most iPhone and iPad cases as well as USB 3.0 connector to provide faster speed to Mac/laptop/PC.

iOS users often face storage problem as Apple devices do not support expandable storage. With the increased use of cameras for photos and videos, users can run out of space easily. The new iXpand flash drive solves this space crunch. Files can be accessed from iXpand through Sandisk’s iXpand Sync app. The app can natively play audio and video files that support file formats such as wmv, avi, mkv, mp4, mov.

Moreover, files can transfer easily through iXpand Flash Drive in comparison to iTunes. The iXpand Flash Drive allows users to automatically back up their camera roll and contacts and watch video formats directly from the drive. iXpand also features encryption software that provides password protection to files.

The new iXpand has a metal body and has a flexible arm for the lightning connector so that it is easy to use with devices in protective cases. It is compatible with most cases.