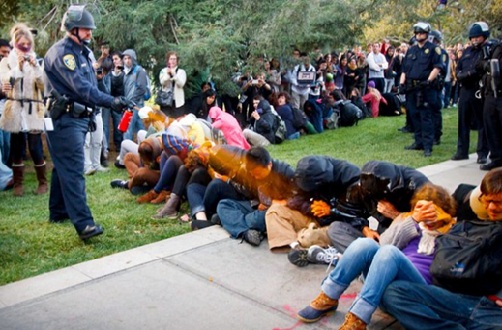 The University of California paid at least $175,000 to hide search result of pepper spray by police on the student Protestants in the University Campus. The university had hired consultants to remove references to the incident as it might affect the reputation of the university.

In the year 2011, students were protesting in the campus peacefully. To suppress the protest, campus police pepper sprayed on them. A video of the campus police officer pepper-spraying on protestors had become a major story. UC Davis noticed the negative response and tried to counteract it.

University Chancellor Linda Katehi had issued a statement on the issue saying that she was very saddened by the incident and accepted the full responsibility for it. She was challenged by the university’s academic staff association and asked to resign but she refused, she didn’t think it as a violation of the policies of the institution.

Local newspaper Sacramento Bee investigated into the matter. According to the documents released after the investigation, one company was paid nearly $93,000 to eliminate references to the pepper spray incident that included expenses towards six months campaign in 2013. Later another PR firm was paid $82,500 to create and follow search engine results management strategy that included negative search results for Katehi too.

Students who were pepper-sprayed by campus police at the University of California at Davis have reacted in outrage. They mention this as an inappropriate and insulting decision by the university to contract firms to scrub mentions of the story on the internet. The university is trying to erase the history of resistance at UC Davis.”

The UC of Davis is being accused of censorship by paying a firm in an attempt to bury references of the protest and its handling of the protest.