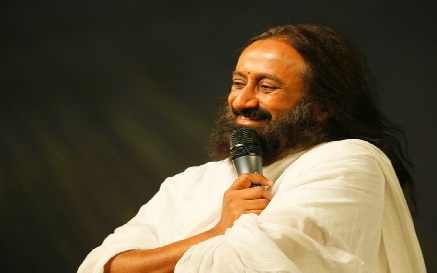 Sri Sri Ravi Shankar is a well known spiritual leader and founder of Art of Living Foundation. He was born on 13 May 1956 in Tamil Nadu, India. The Art of Living Foundation was founded by him in 1981 and since then it is involved in relieving individual stress, societal problems, and violence. Gurudev Shri Shri Ravi Shankar Sudarshan kriya steps are very useful for meditation with breathing technique.

He is usually referred as Gurudev by his followers. He has received many honors including highest civilian awards from countries like Paraguay, Mongolia and Colombia. Recently in January 2016, Sri Sri Ravi Shankar also received India’s second highest civilian award, Padma Vibhushan. He has also been felicitated with 15 honorary doctorates from around the world.

Sri Sri Ravi Shankar was born on 13 May 1956 in Papanasam, Tamil Nadu. He was named Ravi Shankar as he was born on Sunday which was also Lord Shankara’s birthday. At an early age of four, he could recite parts of Bhagavad Gita and was found doing meditation too. He holds a degree in Vedic literature and Physics. After completing his graduation Ravi Shankar uses to travel with his teacher, Maharishi Mahesh Yogi for giving talks and conferences on Vedic science and setting meditation and Ayurveda center.

In 1982, Ravi Shankar entered a ten-day silence period in Shimoga, Karnataka. This led to the birth of Sudarshan Kriya, the centerpiece of Art of Living Course.The first Art of Living course was held in Switzerland, 1983.

The Art of Living Foundation, IAHV and Sudarshan Kriya

The Art of Living Foundation was founded as an international non-profit organization. Through the foundation, various programs are offered to remove stress . The programs are not limited to any specific group of people or society but for everyone.

Sudarshan Kriya is the main component of Art of Living Courses. It involves Ujjayi breathing and Bhastrika in Vajrasan which is followed by rhythmic breathing in Sukhasan. A number of medical studies have been done on this kriya and various mental and physical benefits have been reported. Various benefits include relief from anxiety and depression, improved brain function and immune system and much more.

Ravi Shankar has spread his vision of nonviolence in various gathering throughout the world. He visited Pakistan twice, once in 2004 and then in 2012. He inaugurated two centers of Art of Living in Karachi and Islamabad. The Islamabad center was burned in March 2014. He visited Iraq in 2007 and 2008 to promote peace. He again visited Erbil, Iraq in a relief camp in November 2014.

Ravi Shankar has also participated in interfaith dialogue and presently sits on the Board of World Religious Leaders for the Elijah Interfaith Institute. Through interfaith summits in 2008 and 2010, he has been involved in engaging faith-based leaders for action against HIV.

Ravi Shankar has provided assistance to people various backgrounds like a victim of natural disaster, survivors of wars and attacks and more. Yoga and meditation have been reintroduced by him in a manner that is relevant in modern times.

Ravi Shankar has got credit for bringing opposing parties to negotiating talks in Iraq, Kashmir and Bihar. According to him, a stress-free society can be created by service and reawakening of human values.

The recent cultural program held in Delhi from March 11 to March 13, 2016, was also opposed by many.

Forbes Magazine listed Ravi Shankar as the fifth most powerful leader in India, 2009.

Ravi Shankar has written many books like God loves fun, Be a Witness: The Wisdom of Upanishadas, Management Mantras, Celebrating Love, Secrets of Relationships, Celebrating Silence, Narada Bhakti Sutra, and various other books.